I am especially excited about this announcement after going last year (see my post on it here) and having the best time! If you live in the Florida area you HAVE to make it to this festival, it’s smaller then your usual music festival which makes it more intimate and theirs nothing better than seeing such BIG NAMED ARTISTS in a small and intimate setting…plus they have a ferris wheel and other rides! See you there! Check out the lineup below (my mind is blown- strokes, PIXIES?!, Hozier, yes please!) and click the image to head to the official Guava Festival website to keep an eye out for tickets! 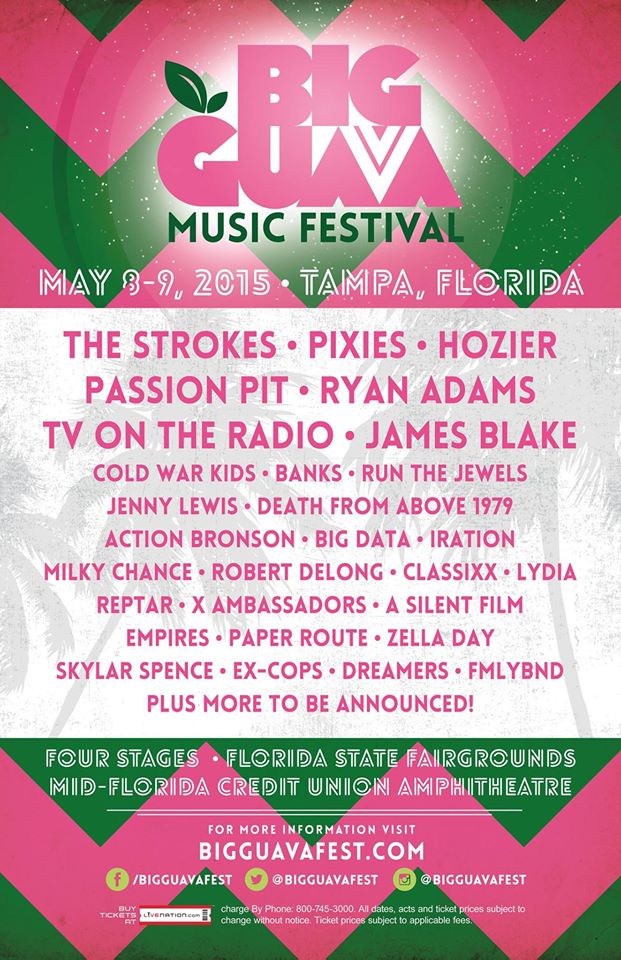 Today Foster the People posted a picture on their Instagram account of Mark Foster singing in bed. If that’s not already great enough, then I find out that it’s for a website called MyMusicRX.

MyMusicRx.org is a “music medicine” site created by the Children’s Cancer Association for kids and teens facing cancer and other serious illnesses. The site gives kids all the resources (concerts, music lessons, digital instruments, and games) they need to feel the music and feel better. I have always believed that music can be a type of medicine for people with illnesses whether it’s their emotions or health bringing them down music has a way of bringing them back up again. That healing power of music is exactly what MyMusicRx is all about. Below you can watch a touching video from the site made to give you an in-depth look into the program. In the video Chris Funk of The Decemberists and a CCA Board Member says  “one of the greatest thing about music is that it suspends reality and can remove people and therefore bring joy” which I 110% agree with. I could almost go off for hours about how amazing music is and how lucky we are that it exists, but I will do my best to contain myself ;p.

Cool right? Ok so back to Foster the People…MyMusicRx put together it’s own music festival called Bedstock.

END_OF_DOCUMENT_TOKEN_TO_BE_REPLACED

Hey guys! I wanted to tell you about a band I’ve been listening to a lot lately. They’re called Pacific Air. I am pretty sure I came across their song “float” in one of my many favorite mixes on 8tracks.com and loved the song so much I decided to check out their other songs. This also happened to be a month before Lollapalooza where the band would be playing! Pacific Air is made up of two brothers from California Ryan and Taylor Lawhon. The crazy thing is these guys are AMAZING and they’ve only been an active band less than a year! What’s really impressive is in that almost year they’ve already opened for Passion Pit, Walk the Moon, Two Door Cinema Club, Atlas Genius, Youngblood Hawke, and Ra Ra Riot AND been invited to Lollapalooza, The Governors Ball Music Festival, and SXSW!

I was lucky enough to see Pacific Air last month at Lollapalooza. I decided I wanted to see them just based off of the one song of theirs I had heard and I was completely blown away by how great of a show they put on! (pictures below)

Unfortunately They only have two more shows this year on the books and neither one of them is anywhere near FL *tear*. I am hoping that they will schedule some last minute shows later on in the year *fingers crossed*. Seriously though people, check out this band, I promise it’ll be worth your while. Listen to their album “Stop Talking” below. My favorite tracks (in case you wanted to know) are “Float” “Move” and “Duet in B Minor”.