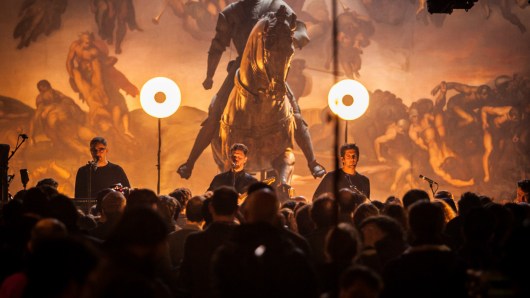 click HERE to watch the entire performance via blogotheque.

It’s that time of year again you guys! The end that is. I put together a “best of” playlist and let me tell you, it was way harder this year to narrow it down to under 200 hundred songs but after 5 long hours going over all my favorites from the year I did my best and got it down to 100! Also i feel like this year was a good year for albums, meaning there were a lot of albums I could listen to from beginning to end without getting sick of them so I decided to make a list of those as well. Check it all out below…

This was my #1 favorite album of the year. I didn’t know what to expect when it was announced since the tracks from their previous album “Torches” all sounded very similar. This album blew my mind. Every track is better than the last. They also toured this year and I was lucky enough to see them twice and they did not disappoint! Favorite Track: “The Truth”

“This is All Yours” Alt-J

Favorite Track “Hunger of the Pine”

This album was big for me this year. I say that because I was never a big fan of Interpol before this album was released. The first time I heard “All the Rage Back Home” I was hooked and when the rest of the album came out I wasn’t disappointed.  Favorite Track: “Twice as Hard”

“The Double Ep: A Sea of Split Peas” Courtney Barnett

Ohhh Courtney. She really got me with this EP. The second I heard the song “Avant Gardener” I had to hear more. I love Courtney Barnett because she sounds like such an old soul with an “I don’t give a shit” attitude. She even performed acoustically on a few talk shows this year and she was mesmerizing! Favorite Track: “Avant Gardener”

Have you ever met a soul who didn’t like Banks music? Because I sure haven’t. This girl has been handing out amazing singles left and right and all of them were incredible and then BAM she dropped Goddess and it was like Christmas came early! The whole album has such a sexy sound and I can listen to it all without wanting to skip any songs. Favorite Track: “Beggin for Thread”

Favorite Track: “Habits of My Heart”

“Dream Your Life Away” Vance Joy

Favorite Track: “Mess is Mine” (had this one on repeat for quite some time.

“Seeds” TV On The Radio

and without further adieu here is the Best of 2014 Playlist…

First of all…FINALLY! I have been waiting for this day. This Tuesday the always quirky and incredible English band Alt-J released their sophomore studio album: This Is All Yours”.  As of right now the only place I have been able to stream it is on Spotify (one of my favorite music streaming services). From start to finish I was really happy with this album. I absolutely loved the singles that the band released earlier on this year (Every Other Freckle, Left Hand Free, and Hunger of the Pine). My favorite thing about these singles is how different they are from each other. I think that same concept applies to the album as a whole. Most of it is very mellow and slow, which I think is a great way for Alt-J to go, they are good at this sound in my opinion. And then there are the other tracks (mainly Every Other Freckle and Left Hand Free) that are very funky and upbeat. Personally I would’ve liked to see a few more of these kinds of tracks on the album. One question I have is..what on earth is “Nara” and how can I get there because the music that takes place there is beyond beautiful. My favorite of these “Nara” songs would be “Arrival In Nara” which kind of reminds of a mix of Sufjan Stevens and the score music from Eternal Sunshine of the Spotless Mind (do you hear it too?). All in all I thought this was a great album and I don’t feel at all disappointing. Have a listen below and let me know what you think!

Yesterday Alt-J released a new single off their upcoming album “This Is All Yours” and it’s GREAT! Check it out below.

Click below to see if Alt-J will be coming to your town on their This Is All Yours” Tour!