In case you haven’t seen it yet,  yesterday Zach Braff released the full trailer for Wish I Was Here….not a teaser, a FULL trailer. And it is SO good it gave me chills. The trailer features a new Shins song which let’s be honest, is reason enough to watch it repeatedly! Check it out below!

Hey guys! It’s been almost 3 months since Zach Braff’s new Kickstarter project “Wish I Was Here” premiered at Sundance Film Festival and FINALLY we get a trailer to go along with all the hype. There isn’t really much dialogue in the trailer but the cinematography looks very impressive and Zach couldn’t have picked a better song to lay over it. He went with “Simple Song” by The Shins which is off of their most recent 2012 album “Ports of Morrow”. He seems to really love The Shins, if you remember he used two of their songs (“New Slang” and “Caring is Creepy”) in his first film Garden State which really helped the band get recognized. Wish I Was Here will be release July 18th. I can’t wait until we get another trailer and some clips perhaps? Check out the very first trailer for what is sure to be one hell of a film….

Rarely do I get out of a movie and want to run home and blog about it but this time around I just couldn’t help myself!!! Ever since I saw the trailer for Warm Bodies I started counting down the days until it came out. Not because it seemed super intellectual or thought-provoking but because it looked hilarious and cute! The movie is set in the post-apocalyptic future where there are humans (who are kept inside a huge steel wall that wraps around the center of the city), zombies (who for some reason reside in the local airport), and boneys (what a zombie turns into if they ‘give up’/flesh hungry skeletons). The main character is R (played by Nicholas Hoult) is a zombie (also the narrator and a hilarious one at that) who lives at the airport with the other zombies and boneys who leave them all alone because they’re already dead. R is not like the other zombies though, he wants more out of life than wandering around grunting and eating humans. During a trip the zombies take to sniff out some humans to eat, they find a group of teens in a pharmacy and go to town. This is when R meets Julie (played by Teresa Palmer) who is the daughter of the leader of the humans. He takes her back to the airport and he starts to ‘thaw out’ and become more human as the movie goes on. I’m not going to spoil the rest but it had an awesome ending! This is coming from someone who really doesn’t care for anything that has to do with zombies (no Walking Dead for me). Aside from the awesome story there was another HUGE pro to this movie: (after the jump) END_OF_DOCUMENT_TOKEN_TO_BE_REPLACED

Here are a bunch of movies I have seen lately that I highly recommend you watch!

END_OF_DOCUMENT_TOKEN_TO_BE_REPLACED

Today I had the day off of work, and usually when that happens I clean..or sleep..or read. Not today my friends, not today! I have really been wanting to see “Sound of My Voice” for quite some time now but it hadn’t come to my theater…until this past weekend. So of course when I had some free time today I ran right over to the movie theater and saw the movie all by myself!

To be honest, I could’ve went into the theater not even knowing what the movie was about and just the fact that Brit Marling co-wrote along with Zal Batmanglij and acted in it was enough to get me to see it, not to mention the true originality of the story!! You may not know who Brit Marling is, I didn’t either until I saw the movie “Another Earth” which was so beautiful and unique! Brit also co-wrote and acted in it (I highly recommend you see it as soon as you possibly can!). There is something about this woman, she is beautiful, smart, and very talented. It’s safe to say you WILL fall in love with her once you see these films.

END_OF_DOCUMENT_TOKEN_TO_BE_REPLACED

Reasons you should see this movie

6) lesson to learn: “People will tell you nothing matters, the whole world is going to end soon anyway,

but those people look at life the wrong way. I mean, things don’t need to last forever to be perfect.”

A girl looking for kicks gets a whole lot more than she bargained for in a singularly curious town in this dark comedy. Caroline Wexler (Kat Dennings) is a clever but cynical 17-year-old whose father is still adjusting to the death of his wife. Caroline’s dad takes a new job and they move to a strange community where the sky is always dark thanks to an industrial fire that’s been burning for several months and isn’t going to be put out anytime soon. Caroline doesn’t have much use for her backward drug-addled classmates, and so to relieve her boredom she sets out to seduce Mr. Anderson (Josh Lucas), the best-looking man on the school’s faculty. While Mr. Anderson tries to avoid responding to Caroline’s blunt sexual overtures, it isn’t long before he succumbs to her charms and is sleeping with his new student. But Caroline’s new romance turns into a romantic triangle when Thurston (Reece Thompson), one of her stoner classmates, falls head over heels for her and she gives him a chance to impress her. Before long, Thurston is declaring Caroline the love of his life, Mr. Anderson is angry over having a rival for her affections, and the local serial killer begins to make their presence known, picking off the town’s teenagers one by one. Also featuring Andie MacDowell and Ted Whittall, Daydream Nation was the first feature film from writer and director Mike Goldbach. 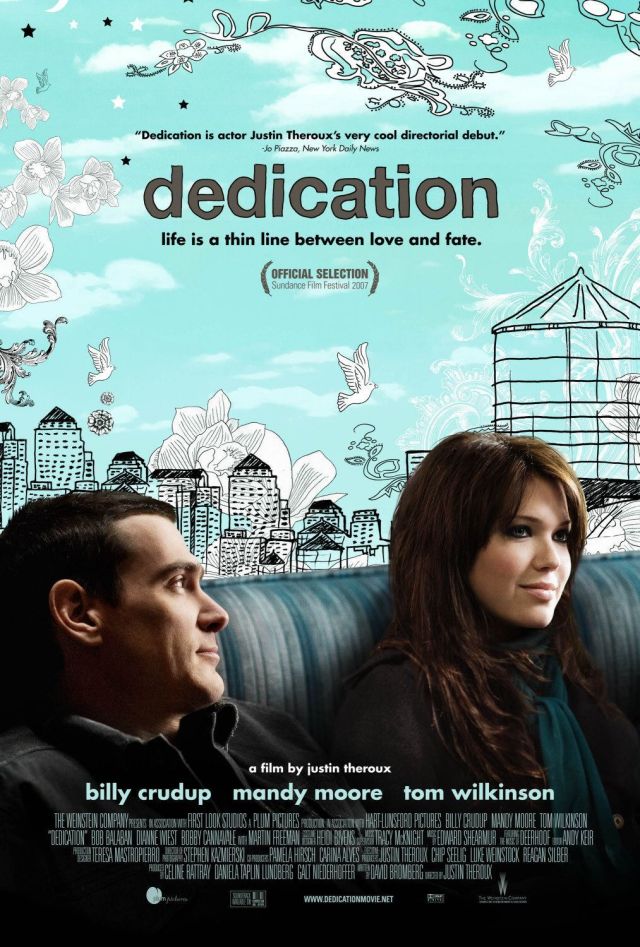 Plot: Henry Roth (Billy Crudup) is an obsessive-compulsive and somewhat misanthropic writer of children’s books. His illustrator and only friend, Rudy (Tom Wilkinson), dies after a fabulously successful collaboration on their series of children’s books about “Marty the Beaver.” Henry is under contract to produce another Marty book for Christmas sales. His publisher, Arthur Planck (Bob Balaban), assigns penniless, lovelorn illustrator Lucy Reilly (Mandy Moore) to work with Henry. She’s sought by her ex-boyfriend Jeremy (Martin Freeman), who dumped her two years ago but shows up apologetic, having dedicated his new book to her. She and Henry go to a house on the shore to work. Will love bloom amid the rocks, or is Henry a bump on Lucy’s road to Jeremy? Rudy’s voice, from the grave, gives Henry counsel.