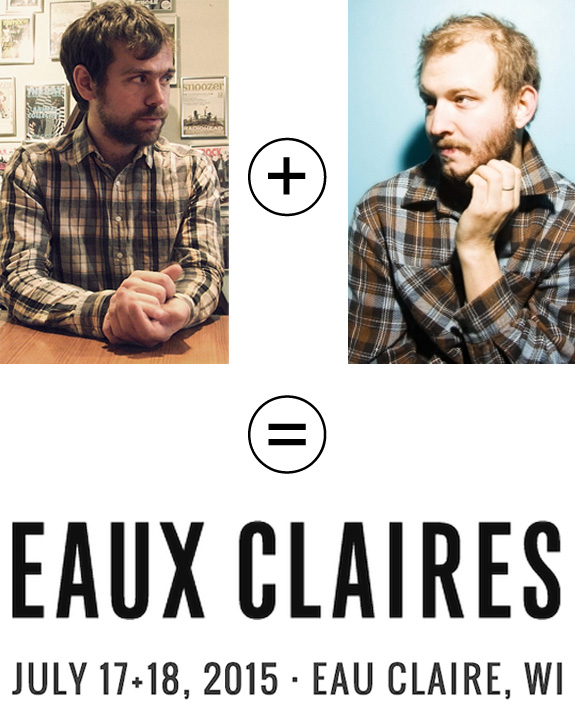 There’s been rumors going around for a while now about Bon Iver’s frontman Justin Vernon putting together his own festival (kind of like David Mathew Bands Fest..except better because I don’t like DMB). Turns out the rumors are TRUE! Justin and Aaron Dessner, guitar and keyboard player of The National are co-curating the Eaux Claire Music & that will take place next July in Eau Claire, Wisconsin (and hopefully continues every year after, as most music fests do). Today they’ve got some tickets for sale HERE. Whats cool about one of the options is the 2 Day Chippewa $200 option (which isn’t bad for a music festival) you get full access to both days of Eaux Claires, unlimited  (yes I said unlimited) premium beer & soft drinks on festival grounds during show hours, custom keepsake mug, and more. Ummmm sign me up!! There will also be camping options nearby. You guys, I think this is the beginning of a beautiful event. Here is what Justin and Aaron had to say about the festival in an interview with Stereogum…

After several years of touring and playing music festivals of all different types around the world, I wanted to put together an event that would honor what we love about this place — including an independent attitude and blaze orange caps — but also shine a light on less familiar and surprising elements that are already weaving themselves into our future.

Having this festival right in my backyard gives me and the guest artists a chance to share familiar work and new creations in a setting close to my heart and different than any other stage in the world. To create this event within view of the Chippewa River — the very river that defines this place — makes it all the more meaningful.

We’re fortunate, because the Chippewa Valley already has a history of great music festivals. Everyone — the city, the county, and the Country Jam folks—has been very supportive. They’re helping us take it beyond music into a celebration of film, art, and things still in the works … just walking around the place is going to be an experience.

Justin and I have been friends and collaborators for years. Working together to create and curate Eaux Claires is something we’ve been talking about for a long time. To finally see it come together, and to imagine the music, art and community the festival will bring together, is very exciting.

According to the pair, a lineup will be announced sometime early 2015. I’ll be sure to keep you posted with festival updates!